ABSTRACT
Post-transplantation lymphoproliferative disease (PTLD) comprises a heterogeneous group of hematolymphoid proliferations resulting from a monoclonal or polyclonal proliferation of lymphoid cells. The clinical presentation varies according to the affected sites. The gastrointestinal tract and the central nervous system are the most common, and constitutional symptoms are frequent. Isolated allograft involvement is rare. We report a case of polyclonal PTLD isolated in the kidney allograft in a patient who received an HLA-identical living donor seven years before. Noteworthy, this patient did not present constitutional symptoms, and his only clinical manifestation was graft dysfunction, expressed by an increase in serum creatinine and mild proteinuria. The diagnosis was performed through renal biopsy, which showed dense lymphoid interstitial infiltrate. The PTLD was polyclonal, unrelated to Epstein-Bar virus (EBV), and it was successfully treated with chemotherapy, reduced immunosuppression, and sirolimus.
Key words: Immunossupression; Kidney transplantation; lymphoma.

The main risk factors for the development of PTLD are: transplantation in childhood, adolescence or young adults, Caucasian race, negative serology for the Epstein-Barr virus (EBV) before transplantation, highly effective immunosuppression, such as induction with anti-inflammatory globulin. thymocyte and maintenance with high exposure to immunosuppressive drugs. Seronegativity for cytomegalovirus, hepatitis C infection and a greater number of HLA incompatibilities with the donor are also described as risk factors(2-4).

The clinical picture fundamentally depends on the site of involvement. Lymphadenopathy and constitutional symptoms, such as fever, inappetence and weight loss, are common, but there is a high incidence of extranodal involvement, especially in the gastrointestinal tract and central nervous system(5-8). Treatment depends on the subtype. Early and polymorphic forms generally respond to reduced immunosuppression and use of mTOR inhibitors, with or without rituximab monotherapy. In cases of monomorphic PTLD, chemotherapy is usually indicated. Adjuvant treatments, such as surgery and radiotherapy, may be necessary depending on the site(9-11).

This report describes an unusual case of polymorphic PTLD isolated from the renal graft, manifested only by acute graft dysfunction. Despite presenting poor prognostic criteria, the patient was successfully treated with reduced immunosuppression, conversion to sirolimus and chemotherapy, preserving the renal graft.

Male patient, 31 years old, brown, was diagnosed with stage 5 chronic kidney disease at age 21. At this time, dialysis therapy was started, and the etiology of the kidney disease was not determined. He remained on dialysis for 2 years and 6 months and underwent HLA-identical living donor kidney transplantation in November 2007. He did not perform pre-transplant EBV serology. He received tacrolimus and sodium mycophenolate as initial immunosuppression, without induction therapy, and maintained a steroid-free regimen. The patient had a favorable post-transplant evolution, without intercurrences, maintaining stable serum creatinine around 1.4 mg/dL.

In a routine consultation, he had an elevation of serum creatinine (2.0 mg/dL), which was confirmed on further examinations (serum creatinine 1.7 -2.0 mg/dL). At the time, July 2014, the patient was using tacrolimus 8mg/day (blood concentration around 5 ng/mL) and mycophenolate sodium 1,440 mg/day. He denied using nephrotoxic drugs or irregular use of immunosuppressants. He also denied fever, chills, sweating, weight loss, dysuria, graft pain or any other symptoms. He had no pain on palpation of the graft, lymph node enlargement or any other changes on physical examination.

The patient underwent renal biopsy, which showed dense lymphoid interstitial infiltrate affecting 75% of the sample, in addition to moderate tubulitis and mild acute tubular necrosis (Figures 1-4). Immunohistochemistry for C4d and SV40 were negative. The immunofluorescence panel (IgG, IgA, IgM, C1q, C3, Kappa, Lambda and fibrinogen) was also negative. In view of the density of the inflammatory infiltrate, it was decided to carry out a study of the immunohistochemical profile of the cell infiltrate, which showed positivity for CD3, CD20, CD138, CD30, kappa, lambda and Ki-67, the latter with a proliferation index of 10 % of lymphoid cells, in addition to high p53 expression, and diagnosis of polyclonal lymphoid proliferation associated with the presence of plasma cells, compatible with PTLD, with p53 marker indicating aggressive disease (Table 1). 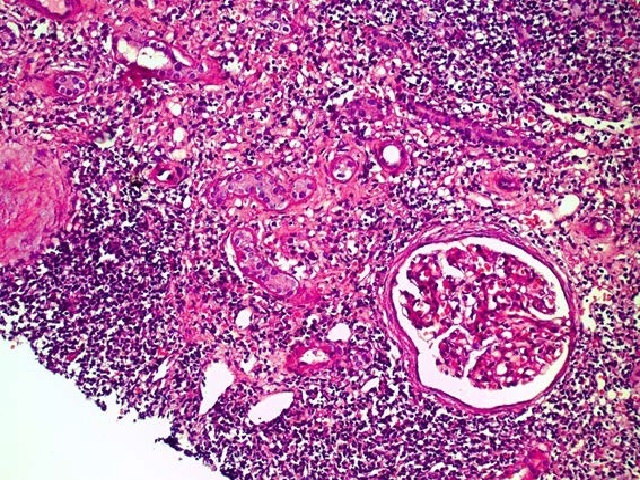 FIGURE1 – Interstitial lymphomononuclear infiltrate not accompanied by edema and significant tubulitis (dissociation between interstitial and tubular components). Associated tubular atrophy. There is a predominance of small lymphocytes. HE, 100X. 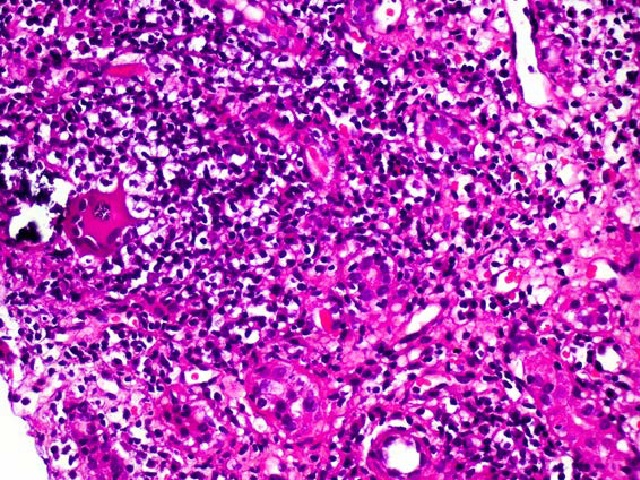 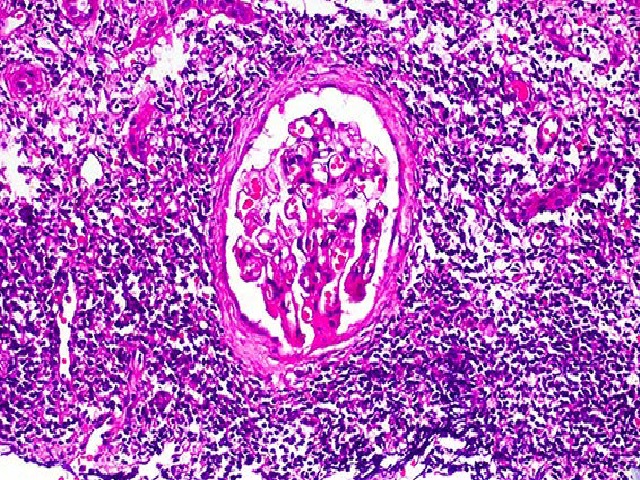 FIGURE 4 – Renal cortex showing dense lymphomononuclear infiltrate, with diffuse distribution throughout the sample sent for analysis. This infiltrate is not associated with significant interstitial edema. There are still tubules with an atrophic appearance and preservation of the architecture of sampled glomeruli. PAS, 200X.

In situ hybridization for EBV was negative, as was PCR for EBV in blood. Staging, which involved bone marrow biopsy and CT scans of the chest and abdomen, did not reveal any changes, confirming that the disease was restricted to the renal graft.

The patient was treated with chemotherapy based on the combination of rituximab, cyclophosphamide, doxorubicin, vincristine and prednisone (r-CHOP), in addition to suspension of mycophenolate sodium, addition of prednisone 5mg and conversion of tacrolimus to sirolimus (blood concentration maintained between 8-10 ng /mL). During treatment, serum creatinine remained between 1.6 – 2.2 mg/dL. At the end of the six monthly cycles of r-CHOP, the patient underwent a new renal biopsy, in addition to the imaging tests used for staging. The new biopsy showed no infiltrate and the imaging tests were normal. Currently, 5 years after the end of treatment, the patient remains under outpatient follow-up, asymptomatic, with stable creatinine around 2.0 mg/dL, using sirolimus 3mg (blood concentration between 6-8 ng/mL) and prednisone. 5mg.

We report a rare case of polymorphic PTLD isolated from the graft in an asymptomatic patient whose clinical manifestation was restricted to renal graft dysfunction, with creatinine elevation, mild proteinuria and normal sediment. The case also illustrates the treatment with chemotherapy in polymorphic PTLD, preserving the renal graft, in a patient with poor prognosis criteria, such as allograft disease, EBV negativity and p53 positivity.

Polymorphic forms of PTLD are a heterogeneous group of hematological lymphoid proliferations composed of a polymorphic population of immunoblasts, plasma cells and lymphoid cells of small to intermediate size, which may have irregular nuclear contours, which erase the architecture of normal tissue and do not meet the criteria. for the diagnosis of any form of lymphoma. Necrosis, cells similar to Hodgkin or Reed-Sternberg cells and numerous mitoses may be present(12). They usually present in patients with constitutional symptoms and polyadenopathies(13). The most common sites for the monomorphic and isolated forms are the gastrointestinal tract and the central nervous system, with the renal graft being an uncommon site for isolated forms(14,15). Furthermore, evidence indicates that PTLD isolated from the allograft is more common in the first year after transplantation(16).

The key to the diagnostic approach in this case was based on the early recognition of renal dysfunction, which led to the request for a biopsy. Histological diagnosis is also a challenge, especially regarding the distinction between lymphoproliferative disorder and other entities with dense lymphocytic infiltrate, such as acute cellular rejection, which may even coexist(16). The existence of a lymphoid infiltrate exhibiting a broad spectrum of lymphocyte differentiation in a patient at low risk for immunological events alerted the pathologist to the possibility of PTLD, which was confirmed by immunophenotyping of the infiltrate.

Polymorphic PTLD is classically described as a mixed proliferation of B and T cells, of varying sizes, and CD30+ plasma cells and immunoblasts can still be observed, some of them with similar Reed-Sternberg characteristics. Light chain restriction can be observed in immunophenotyping and most cases are positive for EBER by in situ hybridization(12).

The CD30 antigen, originally identified as a cell surface marker of malignant Hodgkin and Reed-Sternberg, is a transmembrane glycoprotein member of the tumor necrosis factor (TNF) receptor super family. In lymphoid cells, CD30 is a marker of activation inducible in vitro by mitogenic signals and viral stimulation, and its expression is detected in a small number of immunoblasts in benign lymphatic tissues. Under pathological conditions, CD30 is found at varying levels in different B-cell or T-cell lymphomas and in various reactive (usually focal) conditions. The immunohistochemical expression of this biomarker is essential to improve the classification and diagnosis of the different subtypes of lymphoproliferative diseases that make up the PTLD spectrum. CD30+ cells in polymorphic PTLD are usually CD20+/CD15(17).

In this case, the immunohistochemical examination showed positivity for CD30 in rare cells. The presence of this marker is variable in polymorphic PTLD of the graft and should alert to the differential diagnosis with other forms of this disorder, especially Hodgkin’s Lymphoma(12).The proliferation index evaluated by ki67 was 10% in lymphoid cells, and this positivity can present great variation between cases, reaching up to 80%, and indicating a tendency towards more aggressive behavior(18).

Despite the excellent general condition, the absence of clinical symptoms and the polyclonal form, allograft involvement, EBV negativity and p53 positivity conferred a poor prognosis for the patient, and this was considered in the choice of treatment(19, 20).

Regarding treatment, the case also brings some aspects for discussion. mTOR inhibitors have anti-neoplastic effects, predominantly due to the inhibition of mTORC1 activation, which is implicated in tumor genesis in neoplasms that depend on the activation of the PI3K/Akt/mTOR pathway. In addition to the effect on the proliferation of tumor cells and the tumor microenvironment, these drugs inhibit angiogenesis and endothelial proliferation, which are essential for tumor growth(21). Considering that the patient received an HLA-identical living donor transplant, it was decided to keep the patient on a dual regimen of sirolimus and prednisone even after complete remission of PTLD.

Another important aspect of the treatment in this case was the preservation of the renal graft. Due to the clinicopathological heterogeneity of the disease, there is no unified treatment approach. In general, the initial therapeutic intervention consists of reducing immunosuppression, however complete or partial response occurs in less than half of the patients and durable remissions may not occur(22). Other treatment options include monoclonal rituximab antibody given in combination or in sequence with combined chemotherapy, while surgery or radiation may be considered in selected cases. Several chemotherapy regimens have been used in the treatment, with CHOP being the most common. The rate of complete remission with combined chemotherapy for PTLD is up to 92%(23).

In conclusion, the case illustrates the need for a quick and thorough investigation of renal graft dysfunctions. The pathologist’s experience was fundamental for the diagnosis. In addition, the need for individualized treatment considering prognostic markers and the possibility of preserving the renal graft should be emphasized.

Acknowledgments: The authors would like to thank the team of the Renal Transplant Service of the General Hospital of Fortaleza and the Hematology team of the Walter Cantídio University Hospital for their tireless dedication to patient care. We are also grateful for the collaboration of Professor Francisco Dário Rocha Filho, who provided the completion of the immunohistochemical analysis.