Technological advances in the automation process of the blood count in recent years have made this test faster in sample analysis, especially with the introduction of conveyors and smear processors and slide staining. But they also brought greater security to the results by improving the identification of normal peripheral blood cells and signaling, through the emission of alerts/alarms (flags), for the presence of immature bone marrow cells in these samples(1-7).

Accuracy in the identification of immature bone marrow cells in peripheral blood has only been possible thanks to the incorporation of impedance, flow cytometry and more recently fluorescence signals of the DNA/RNA content of the cell nucleus for counting and analysis of the leukocyte differential. Thus, allowing the analysis of leukocyte differential dispersion in complexity and cell size graphs, or cell complexity and fluorescence signals of DNA/RNA content(3-12).

Specifically in relation to analyzers that use the principles of electrical impedance, optical dispersion and analysis of cells by DNA/RNA fluorescence signals from the cell nucleus, we can highlight the Mindray BC6000 and Sysmex® hematology analyzers, which have similar methodologies(4,7-9,11,13). These equipments, in addition to providing the results of counting and differential of leukocytes in five parts, also propose the differential counting of erythroblasts (NRBC) and other body fluids such as pleural and synovial fluids(4,8,12-14).

The incorporation of any new methodology into the routine of a clinical analysis laboratory, however, must first be validated to ensure its analytical quality by evaluating the accuracy of the results. Thus, the International Council for Standardization in Hematology (ICSH), for example, defines as precision the measure of agreement between the estimated value of a given analyte and the observed value obtained using independent techniques(15).

Thus, this study presents the validation of the automated counting of erythroblasts in peripheral blood samples in the Mindray BC6000 hematology device through a comparative method with the manual technique (Gold Standard), and verified the existence of a correlation between the maturation stages of erythroblasts and the graphics generated by the equipment.

Casuistry: Prospective study with routine peripheral blood samples from the Dr Paulo C. Azevedo Clinical Pathology Laboratory, located in the city of Belém, Pará, or bone marrow samples from the same laboratory from an oncology hospital, regardless of age and gender, for characterization of the immunophenotypic profile of the erythroblasts present in these samples and validation of the automated counting of erythroblasts in the Mindray BC6000 hematology counter from June 2019 to December 2020.

For this purpose, 20 bone marrow samples from patients with acute leukemia, disease-free, under therapeutic follow-up were analyzed, that is, in bone marrow recovery after specific treatment with 15 or 30 days post-chemotherapy, as a positive control for the definition of erythroblast populations at different stages of maturity. In addition, 17 samples of peripheral blood from patients undergoing routine blood counts in that laboratory, arising from spontaneous or hospital demand, to verify whether it would be possible to characterize the stage of maturation of peripheral blood erythroblasts in the graphic plotting of the Mindray BC6000 equipment.

Characterization of Samples: Peripheral blood or bone marrow samples from patients of both genders, of any age group, anticoagulated with EDTA (Ethylenediamine Tetraacetic Acid), with a volume of 2ml to 5ml, and with more than 18% of erythroblasts, for each, were included. 100 leukocytes were counted, after morphological analysis by common light microscopy with an immersion objective on a slide stained with May Grunwald by a specialized professional from that laboratory.

Exclusion Criteria: Samples of coagulated peripheral blood or bone marrow, with a volume of less than 2 ml, with less than 18% of erythroblasts after morphological analysis, or from patients with active acute leukemia, were excluded.

Characterization of the presence of erythroblasts by the Mindray BC6000 equipment:

The samples selected by the quantity of erythroblasts after morphological analysis were submitted to acquisition in the Mindray BC6000 equipment, which, according to the manufacturer, has the ability to identify and quantify the presence of erythroblasts in peripheral blood samples.

Immunophenotypic characterization of erythroblasts: For the immunophenotypic characterization of the various stages of erythroblast development in peripheral blood and bone marrow samples, the mononuclear cells were first separated in a conical centrifuge tube with the addition of 2ml of Histopaque-1077® and then the tube was tilted to 45o, gentle addition of 2ml of peripheral blood or bone marrow sample with Pasteur pipette. Afterwards, the samples were centrifuged at 1,500 rpm for 30 minutes and then, using another Pasteur pipette, the layer of mononuclear cells was carefully removed from the interface between the Histopaque gradient and the red blood cells, transferring these cells to another conical centrifuge tube containing 10ml of PBS (0.10%) Euroimun Sodium Perbarate. With another centrifugation at 1,500 rpm for 10 minutes, discarding the supernatant and resuspension of the cell pellet in 5ml of PBS.

Then, 100µL of this solution was transferred to each previously identified conical flow cytometry tube. Subsequently, 5µL of different combinations of commercial monoclonal antibodies, panhematopoietic, CD34 and CD45, or myeloid, CD33, CD117 and CD235a (Glycophorin A), labeled with the fluorochromes FITC, PE, Percyp and APC, were added. Followed by the addition of 200µL red cell lysis solution (Facslysing BD 1:10), incubation in the dark for 10 minutes, and subsequent addition of 1ml (1,000µL) of water to each tube. For further analysis after acquisition of 10,000 events in a BC Coulter DxFlex® flow cytometer, with CytExpert for DxFlex® software (BC, Indianapolis, Indiana, USA), for thirteen colors.

Statistical Analysis: The data obtained were analyzed using the Statistical Package for Social Sciences (SPSS) software, version 26 (SPSS Inc., Chicago, USA) by applying descriptive statistics tests to determine the mean, standard deviation and median referring to the erythroblast counts by the automated and manual methods; of normality by Shapiro-Wilk, to verify if the data had normal distribution, and by Mann-Whitney to compare the medians of the amount of erythroblasts counted by the two methodologies. Being adopted as significance level p ≤ 0.05.

Ethical Aspects: As this is a prospective study without the researchers’ involvement with the research subjects or the use of any personal data of the same, those responsible for the research signed a Data Use Commitment Term (TCUD) with the institutions involved, with a request for a Term Waiver of Free and Informed Consent (TCLE), as provided for in the guidelines and regulatory standards described in Resolution No. 466 of December 12, 2012, complemented by article 17, item VII of Resolution 510/2010.

Regarding the erythroblasts counts in the peripheral blood of the analyzed patients, it was observed that, for the newborn samples (9/17), the mean and standard deviation values were 163.0 ± 168.6 for the automated counts and 171.5 ± 185.6 for manual counts. While for samples from patients aged over 2 years (8/17) the mean values and standard deviations observed were 84.1 ± 174.5 for automated counts and 84.2 ± 174.4 for counts erythroblast manuals.

Then, the analysis of the existence of correlation between the erythroblast counts was carried out by manual and automated methods, by performing the normality distribution test, which showed that there was no normal distribution between the two methodologies. In view of this result, the non-parametric Mann-Whitney test was performed, which revealed a value of p = 0.78, thus demonstrating that the values of the automated counting of erythroblasts, when compared with the manual counting, are the same, thus being the methodology of Automated erythroblast count on Mindray BC6000 hematology equipment considered statistically validated for routine laboratory use.

TABLE 1- Analysis of counts, manual and automated, and immunophenotypic characterization of erythroblasts in peripheral blood samples from patients from the routine of the Dr Paulo C Azevedo Clinical Pathology Laboratory, from June 2019 to December 2020. 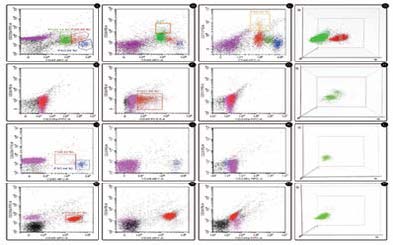 In this sense, it was observed that there is no relationship between the stage of differentiation of erythroblasts, observed in the peripheral blood of a sample, with the respective dispersion of these cells in the graphs obtained from the BC6000 automation equipment in hematology – Mindray®. As we can see, for example, in Figures E, F and G, where the presence of 78.11% of orthochromatic erythroblasts (pink) and 21.89% of polychromatic erythroblasts (red) is observed, these may even suggest the existence of correlation with the respective graphical dispersion by the Mindray BC6000 equipment. However, when the analysis is performed in relation to Figures M, N and O, where there is a predominance of polychromatic erythroblasts (36.47%), it is observed that, even so, the graphic dispersion of the Mindray BC6000 equipment does not change in regarding its special distribution.

As already presented, this research consisted of evaluating the performance of the Mindray BC6000 hematology analyzer for the automated counting of erythroblasts when compared to the manual counting on a slide (gold standard). In this sense, the results obtained with the analyzed automated methodology proved to be capable of accurately counting erythroblasts and were thus validated for use in the routine of the clinical analysis laboratory that supported the research. Thus ensuring precision in the results and more safety and speed in the release of blood count reports.

These data corroborate other studies in the literature that compare the count of erythroblasts in peripheral blood using non-automated and automated methodologies, and which also showed no statistical difference between these methodologies(3,5,9,10-12,14,16).

It is known, however, that there is today on the market a large number of automated hematology analyzers available for routine use in clinical analysis laboratories, however, each using a variety of technologies for the analysis of peripheral blood samples. This fact, however, requires that each laboratory, before placing one of these devices in its diagnostic routine, has to perform their previous validation(1,3-7,14,16-18).

SHEN et al(12) in their studies, in turn, compared automated and manual erythroblast counts in peripheral blood samples from several patients. In this validation, the equipment used for this counting of erythroblasts was the Mindray BC6000 and, similar to what was observed in our study, there was no significant difference in the results obtained when compared to the manual counting (p>0.05). These authors then suggest that this equipment has 80.0% sensitivity and 96.9% specificity for counting erythroblasts.

A similar study carried out by GRIMALD and SCOPACASA(19) with samples from patients who had a hematological disease with the presence of immature cells of the myeloid lineage and erythroblasts acquired in the hematological analyzer CELL-DYN 4000 (Abbott®), which uses similar technology to the equipment Mindray BC6000 also showed similar results in terms of precision for counting erythroblasts and the same difficulty in graphically identifying the stages of maturation of these cells.

Thus, the validation proposed in our study showed that the Mindray BC6000 hematological counter has good analytical performance for counting erythroblasts in peripheral blood. However, the graphics generated by the equipment do not show correlation with the maturation stages of erythroblasts.

Conflicts of Interests: The authors declare they have no competing interests.