ABSTRACT
Female patient, 29 years old, with systemic lupus erythematosus in current use of prednisone and azathioprine, presents with bulging in the forearms, lumbar region and left thigh for 15 days. Ultrasonography and magnetic resonance imaging showed the presence of  serous collections in these locations. The material was punctured and the samples were sent to the laboratory. The microbiological examination revealed the presence of acid-resistant bacilli and blood culture in a specific medium was positive for Mycobacterium tuberculosis. Molecular and immunochromatographic tests were positive for M. tuberculosis, and the diagnosis of Tuberculous Piomyositis was closed.
Key words: pyomyositis; tuberculosis; abscess.

Tuberculosis (TB) became known in the 19th century when it decimated hundreds of thousands of people around the world. From the mid-twentieth century, there was a marked reduction in the incidence and mortality related to TB, already observed at that time in developed countries, mainly due to the improvement in the living conditions of populations and in health care(1).

In the early 1980s, we witnessed a global upsurge of TB and, since 2015, it is considered a re-emerging disease(1). Its most common form of manifestation is pulmonary and about 20% of diagnosed cases are extra pulmonary forms. Tuberculous pyomyositis is one of the extra pulmonary presentations, rarely described in the medical literature and its pathophysiology is still uncertain(2-4).

A 29-year-old female patient was admitted to Hospital São Paulo reporting that, for two weeks, she presented a painless bulging in the right wrist and later in the left wrist, passing to the forearms (Figure 1), which became painful and with phlogiston signs. With the evolution of the condition, he also presented bulging in the lumbar region and left thigh. One day before 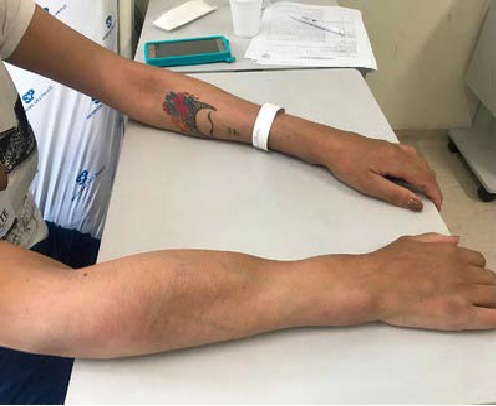 As a history, he had a diagnosis of systemic lupus erythematosus (cutaneous, joint, pulmonary arterial hypertension, positive FAN) in current use of prednisone and azathioprine. She is a former smoker (one pack/year) and underwent total athyroidectomy in 2018 for follicular thyroid cancer in 2018.

On physical examination, the patient was in good general condition, ruddy, hydrated, acyanotic, anicteric, afebrile, without lymph node enlargement. Synovitis was observed in the 2nd metacarpophalangeal muscle of the left hand and the 5th metacarpophalangeal muscle of the right hand, in addition to extensive bulging in the right wrist and forearm and left wrist; two centimeter nodule on left forearm; lump in the lumbar region; muscle swelling in thighs. Presence of recent tattoos on the lower back, thighs and left arm.

Laboratory tests showed an acute inflammatory process, with C-reactive protein of 66mg/L (up to 1.0mg/L) and erythrocyte sedimentation rate of 66mm (up to 20mm/h); blood count with mild anemia and neutrophilic leukocytosis. Biochemical tests of renal function, markers of liver damage and electrolytes were normal. Serological tests for viral hepatitis and for acquired immunodeficiency were negative; the syphilis test was nonreactive.

Ultrasonography of the wrist and soft tissue was performed, which showed liquid distension of the tendon sheaths of the first and second compartments of the extensors of the right wrist, extended to the proximal third of the forearm, determining a collection involving the muscle bellies, measuring 13.9×4.8×1. 6cm. Magnetic resonance imaging of the right wrist and forearm showed extensive tenosynovitis, fasciitis and moderate myositis at the level of the wrist and arm.

The material collected by puncture of the right forearm was sent to the laboratory for analysis, showing positivity for acid-resistant bacillus (Figure 2) and, 15 days later, culture in Lowenstein-Jensen medium revealed positivity for M. tuberculosis (Figure 3). The rapid molecular test (Figure 4) was positive for the M. tuberculosis complex, as well as the rapid immunochromatographic assay (Figure 5) for qualitative identification of the same complex. 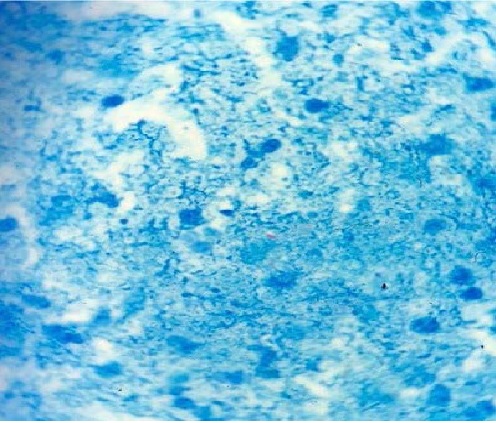 During the clinical and laboratory investigation, no primary focus of TB was found, the diagnosis of Tuberculous Pyomyositis (PT) was made and therapy with RIPE (Rifampicin, Isoniazid, Pirazinamide and Ethambutol) was started. In a few days, the patient was discharged, asymptomatic, for outpatient follow-up.

Pyomyositis is the term used to describe a bacterial infection with abscess formation or myonecrosis in the musculoskeletal system. Any musculoskeletal group can be affected, alone or concomitantly(3), the most common being: thigh muscles[6], glutes[6,7,8] and trunk(5,7,9).

It is more frequent in males, especially in the first or second decade of life, even in the absence of comorbidities. Adults over 30 years who develop the disease, in 50% of the time, have some comorbidity(10). 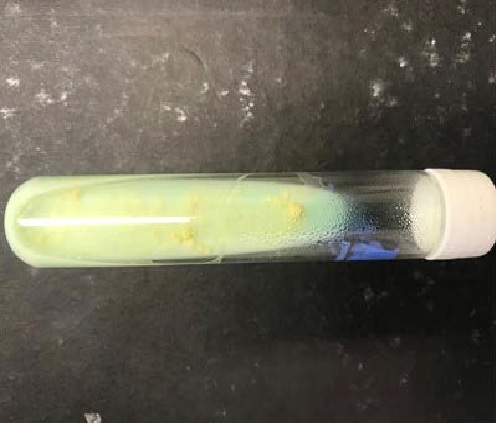 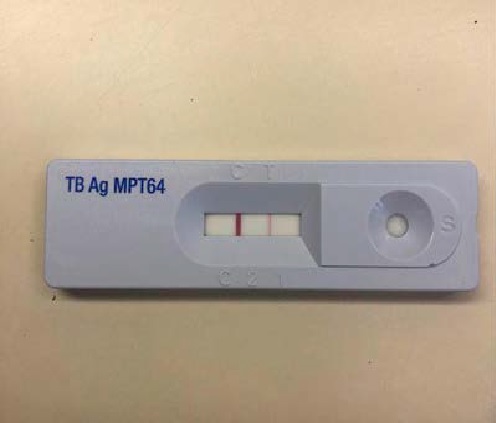 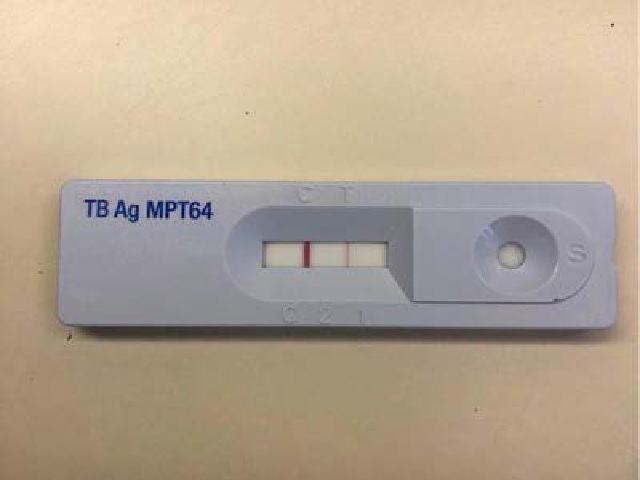 The etiology of Pyomyositis is mainly attributed to Staphylococcus aureus (85-95%), but it can be caused by Streptococussp; E. coli; Salmonella enteritidus; Mycobacterium tuberculosis and Candidaalbicans(10-12).

PT is rare and usually occurs due to invasion of adjacent structures due to primary infection, hematogenous or lymphatic dissemination(13,14). In the absence of these conditions, the disease can be found in patients contaminated by needles; idiopathically in immunocompetent or immunocompromised patients(2).

Clinically, the manifestations are classified into 03 stages(10):

Stage 1: characterized by fever, muscle pain and night sweats. The abscess is not yet apparent.

Phase 2: occurs between 10 and 21 days after the initial symptoms, characterized by fever, muscle edema and leukocytosis.

Phase 3: is the most severe phase with general repercussions, for example, severe sepsis and even septic shock.

Considering the diagnostic tests, blood cultures are positive in less than 40% of the cases of PT, and the secretion culture is a little more sensitive(10).

Magnetic nuclear resonance is the gold standard test for evaluating an infectious or inflammatory process in soft tissues and muscle groups(10). It is considered the most useful and indicated method for the diagnosis of PT(6,9,10,15). On the other hand, ultrasonography is still the most used method given its wide availability and low cost. In addition to providing the diagnosis, it also helps in the follow-up of treatment and guided puncture of abscesses.

Abscess drainage should be performed by exploratory laparotomy or ultrasound-guided puncture and the material sent for laboratory study: cytological, biochemical, microbiological evaluation, among others(4,14). Other tests that support the diagnosis include blood count and inflammatory tests(10).

Regarding the treatment of PT, the same antimicrobial regimen used for pulmonary tuberculosis is used: Rifampicin, Isoniazid for six months and two months of Ethambutol(1).

PT is a rare extra pulmonary presentation, however, one should always be aware of this entity, especially in immunocompromised patients. The early diagnosis of the disease is essential for the institution of the correct therapy and consequent cure.

Conflict of Interest: All authors disclaim any conflict of interest.