Diabetes mellitus (DM) is a highly prevalent disease that affects a large number of people worldwide. In Brazil there are approximately 5 million confirmed cases(1-3), but even with guidance and the availability of information, it is a subject that still raises doubts and a difficult treatment effectiveness, as patients with diabetes mellitus must adapt their lifestyle to live in the best possible way with this disease through changes in eating habits, physical exercise, use of medication and, in some cases, the use of insulin(4-7).

Prevention and delay of chronic complications are achieved through glycemic control and therapeutic adherence(8-10), and for that, it is necessary to regularly measure glucose levels through rapid tests, known as hemoglycotest (HGT), normally marketed in pharmacies, or with laboratory tests (performed in conjunction with other routine tests(11-13).

However, the cost, quality and handling is different for each point of care equipment. These technological differences can cause uncertainty in the interpretation of blood glucose results by patients, physicians and caregivers. Glucose determination using the “point-of-care” technology in pharmacies has emerged as another alternative for offering quick, cheap and accessible tests to the population(14,11).

The glucometer is a rapid glucose test device, an easily accessible and very practical device, as it is possible to measure at home with just one drop of blood, widely used by diabetics to control blood glucose(15,16). However, there are differences in the accuracy of this device compared to tests. (Roche) rapid test device was used with capillary and venous blood samples, relating it to the venous glycemic dosage. The analysis of the results showed a significant difference between the venous glucose dosage and the two methods used in the rapid test, between capillary blood glucose and plasma venous glucose (r=0.6543) and between venous blood and plasma venous glucose (r=0.5038) (p®laboratory tests(17). De Cordova et al. (2009)(1) compared the blood glucose levels of patients using the glucometer method and laboratory measurements to measure their correlation and differences. The Accu-Chek Advantage< (Abott) obtained better results using capillary blood, even though the two devices had a strong correlation with laboratory tests (r ≥ 0.95)® (Roche) device obtained better results using venous blood, while the Optium Xceed® (Abott) devices and compared with the conventional laboratory venous plasma glucose, concluding that there were differences between the glucometers and the laboratory method, an overall mean blood glucose of 119.57 mg/dL, ranging from 74 to 285 mg/dL, a coefficient of variation of 7.10% in which the Accu-Chek Performa® (Roche) and Optium Xceed® 0.001). Studies carried out by Neves et al., (2016)(18) used the Accu-Chek Performance.

Laboratory methods use the glucose oxidase method, a spectrophotometric technique in which blood is analyzed through a 505nm red product, precisely determining the concentration of glucose in the sample(19,20). The laboratory quality control requirements recommended by RDC 302 make this methodology the “gold standard” for these tests.

With the technological evolution and expansion of start ups, new point-of-care equipment has been offered in the Brazilian and world markets(21-24). A star up in southern Brazil developed a rapid test reader using colorimetry and immunochromatography methods using artificial intelligence (A.I.) and “internet of things” principles, capable of performing several quick tests because they are agile, practical and quick (circular letter No. 4/2019/ SEI/GGTES/DIRE1/ANVISA process No. 25351.934427/201891). The equipment of this star up, is equipment available in several pharmacy chains that despite the guarantee and quality certification of the manufacturer, there are no scientific studies related to the technology of this equipment with other existing ones, which can cause insecurity and distrust in users and caregivers. The positive correlation analysis of the equipment with other methodologies could guarantee safety for the patient, the caregiver and guarantee the quality of the results of this new technology(18,25,26).

Based on these principles, the aim of this study is to analyze the correlation of blood glucose results from digital pulp using artificial intelligence equipment (EIA) and using a glucometer, with venous blood glucose by laboratory analysis (gold standard).

Casuistry: 20 individuals of both sexes, aged between 18 and 50 years were recruited for voluntary participation for the donation of digital pulp and venous blood samples. Healthy, fasting and non-fasting diabetic patients were included in order to obtain samples with the greatest possible glycemic fluctuation due to the analytical range of the methods.

Experimental Procedure: Following the manufacturers’ standards, the calibration of the HGT devices (Accu-Check – Roche) and artificial intelligence equipment (EIA) was carried out. Digital pulp blood samples were collected from the side of the ring finger of the patient’s non-dominant hand and immediately and simultaneously analyzed using a glucometer and artificial intelligence (EIA) equipment. For analysis in the EIA, a drop of blood was placed in a capsule with reagents and introduced into a reader connected to the internet; after the analysis, the results were sent to the central laboratory of the manufacturer and analyzed; after analysis and verification, the report was sent via an application on the patient’s cell phone. These determinations were carried out in the pharmaceutical establishment under real conditions of analysis.

Then, 5mL samples of venous blood were collected aseptically from the antecubital fossa of the volunteers and placed in a test tube with sodium fluoride (antiglycolytic agent); samples were centrifuged at 1500 rpm for 15 minutes; the plasma was extracted and placed in Eppendorff flasks to perform the biochemical glucose dosage. Glucose concentration was determined by endpoint assay by the glucose oxidase principle using commercial biochemical analysis kits (Labtest®) following the manufacturer’s recommendations. Internal (Qualitrol – Labtest®) and external (Controllab®) quality were applied for reliability of the method. The spectrophotometric analysis was carried out with the reading in a semi-automated Biosystems BTS350® spectrophotometer. The determinations were performed in duplicate and the means used for statistical analysis purposes.

Ethical Aspects: The results were gathered and compiled into

a worksheet. Prior to the statistical analysis, data preparation

was carried out, with the intention of detecting typing errors and

missing data (missing) that could compromise the analyses. The

results were transcribed to a worksheet followed by descriptive and

The normality of the sample was tested using the Shapiro-Wilk test. With a non-parametric distribution, a correlation analysis was carried out based on a process of rank comparison, by determining the Spearman correlation coefficient with a minimum significance level of p < 0.05.

From the compilation of the data, correlation analysis was carried out in comparison of ranks, which consists of ordering the elements that make up the two sets of values under analysis, then calculating the Spearman correlation coefficient. Results expressed in absolute numbers where:

The Kruskal-Wallis test was used to compare the means of the different methods. For pairwise comparison of methods between samples, the Wilcoxon paired test was applied with a minimum significance level of p < 0.05.

Spearman’s correlation analysis performed between all types of tests shows that there is a strong and statistically significant positive correlation, indicating the compatibility of results regardless of the method applied.

Figure 1 shows the graphical representation of the distribution of results from the correlation analysis of glucose measurements by glucometer (HGT) and artificial intelligence equipment (EIA) showing a Spearman correlation coefficient (R²) equal to 0.847 with a strong positive correlation and statistically significant (p<0.001). 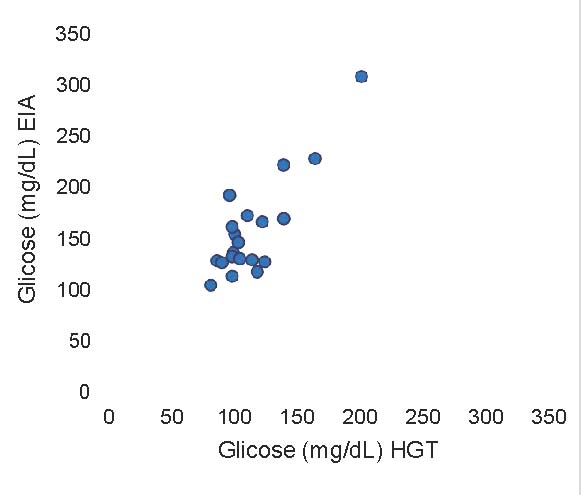 Figure 2 shows the graphical representation of the distribution of results from the correlation analysis of glucose measurements by hemoglycotest (HGT) and conventional laboratory measurements, presenting a Spearman correlation coefficient (R²) equal to 0.822 with a strong positive and statistically significant correlation (p<0.001). 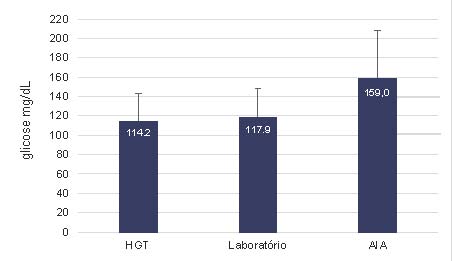 Statistical analysis of glucose results by different methodologies shows no significant difference by the Kruskal-Wallis test for non-parametric data. By choosing to carry out a study with a heterogeneous population to achieve low and high concentrations of glucose, it resulted in a high standard deviation that could interfere in the interpretation of this specific analysis. To resolve this bias, a paired analysis of the patient was performed using the Wilcoxon paired test for non-parametric data, which also showed no significant difference Figure 4. 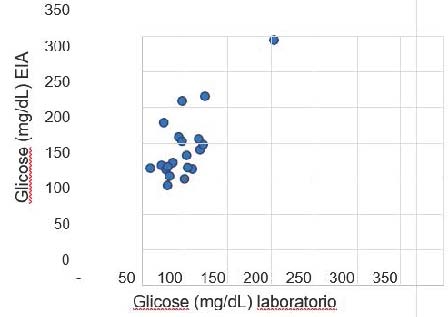 FIGURE 2: Graphical analysis of the linear correlation by rank between glucose
measurements by glucometer (HGT) and conventional laboratory measurements

Figure 3 shows the graphical representation of the distribution

of the results of the correlation analysis of glucose measurements 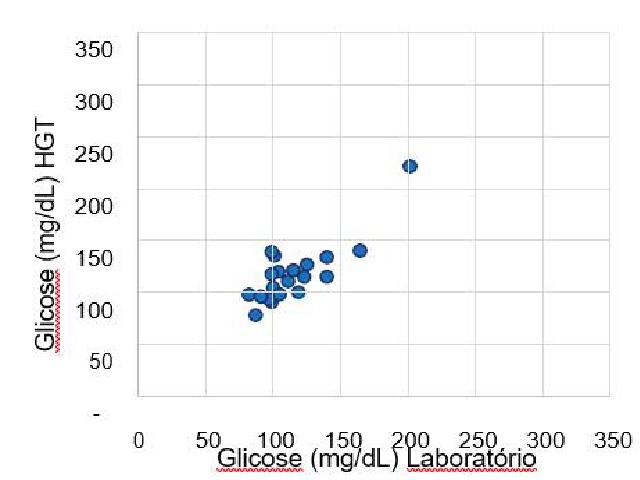 FIGURE 3: Graphical analysis of the linear correlation by rank between glucose measurements with artificial intelligence equipment and conventional laboratory measurements

In this study, slightly different values between each method (mainly laboratory and AIA) were expected, as according to Neves, et.al (2016)(19) there is a difference between the blood venous concentration compared to that of the digital pulp – where they are performed the standard point of care tests in addition to this artificial intelligence device.
As you can see in Figure 1 and 2, the tests have a strong correlation with each other, as De Cordova, et.al (2009)(1) demonstrates in their comparative study between glucometer and laboratory testing, a strong correlation was observed between capillary blood samples and of venous blood (r=0.8742), however Figure 3, even showing a strong correlation with laboratory tests (p<0.001), the analysis of Figure 4 shows that the mean and standard deviation of glucose determined by HGT and by the laboratory method are close (114,2±28 e 117,9±30 mg/ dL respectively), while the mean determination by EIA was 40% higher (159,0±48 mg/dL) when compared to HGT and laboratory dosage.
The statistical analysis of the results does not show a significant difference given the analytical variability, but from a clinical point of view, the means determined here may be the difference between a pre-diabetes diagnosis and a diabetes mellitus, indicating that 4 a strong correlation is not enough to ensure reliable clinical interpretation of the result. Spearman’s correlation analysis considers coefficient values greater than 0.9 to be a very strong positive or negative correlation. The correlation found between the EIA and the laboratory method was R² = 0.755, which according to Spearman’s analysis is considered a strong correlation, but very close to a only moderate correlation (R² between 0.500 and 0.700). For the safety of the patient, healthcare team and caregivers, a correlation greater than R² = 0.900 (very strong) should be the desirable goal by manufacturers, not only for the precision of the results, the reduction of variability and increased reproducibility, but mainly for their accuracy.
The present study is limited by the sample size since it is an independent study, of academic interest, of its own development, without external sponsorship of any nature, which the authors declare their absence of conflict of interest. On the other hand, this study innovates because there is no study in the literature promoting the comparison of the three methods, especially the artificial intelligence equipment used in this study.The proposed technology of biochemical analysis using artificial intelligence is a very promising innovation for laboratory medicine. However, the improvement and refinement of this technology is necessary, as well as future studies using the same methodological strictness, but with a larger sample size.
CONCLUSION

The present study shows a strong correlation between the methods, however the mean concentration of the EIA in comparison with the gold standard laboratory methods and glucometer showed, on average, 40% higher values, which can be determinant in the identification of a normoglycemic, pre-diabetic patient or diabetic.

Regulatory agencies, users and other health professionals should be aware of new devices and procedures in the medical field that can facilitate the diagnosis of diseases quickly and easily, however, the fact that laboratory tests tend to be safer and more accurate in their results.

Conflicts of Interests: The authors declare they have no competing interests