Choriocarcinoma is a rare highly malignant tumor. We report a case of 35-year-old woman, with a history of four months menstrual irregularity and human chorionic gonadotropin persistently positive that presented transvaginal ultrasound normal and the computed tomography scan of the chest showed three nodules and abdominal scan evinced a hypervascularized solid nodular lesion on left kidney. An ultrasound-guided biopsy of left kidney was performed with a pathologic diagnosis of renal choriocarcinoma. After chemotherapy the human chorionic gonadotropin was negative and the patient returned to normal menstrual cicles.

We describe an atypical case of gestational choriocarcinoma diagnosed from renal lesion biopsy, with metastatic foci in lungs, without identification of intrauterine disease.

human chorionic gonadotropin (hCG) persistently positive. She had one previous normal full-term delivery in 2002 and a spontaneous miscarriage in 2014. She denies other comorbidities and did not use any contraception medication. At admission, in 2016, the patient was asymptomatic, with a history of persistent brown vaginal discharge for two months, associated with 4-month lateness of period and increased values of hCG (150036mUI/ml to 904940mUI/ml). On examination, no alterations were found. The abdominal and pelvic ultrasound didn’t reveal any alteration, but computed tomography (CT) scan of the chest and abdomen exhibited bilateral lung nodules, the biggest one located in lower right lung measuring 2,6cm Figure 1, typical of secondary involvement, and hypervascularizated solid nodule in the left kidney parenchyma measuring 2,9cm, suggestive of renal carcinoma Figure 2, without changes in CT scan of the skull. An ultrasound-guided percutaneous biopsy of the renal parenchyma demonstrated renal choriocarcinoma on anatomopathological result.

The patient received 8 cycles of endovenous chemotherapy (EMA-CO: etoposide, methotrexate, actinomyocin D, vincristine and cyclophosphamide) from April to August 2016 and hCG follow-up. Patient presented good tolerability to medication with a drop in hCG levels and return of regular menstrual cycle. She has been following up with the oncology team with disappearance of lesions evidenced in imaging exams since January 2018 and negative hCG levels since October 2016. 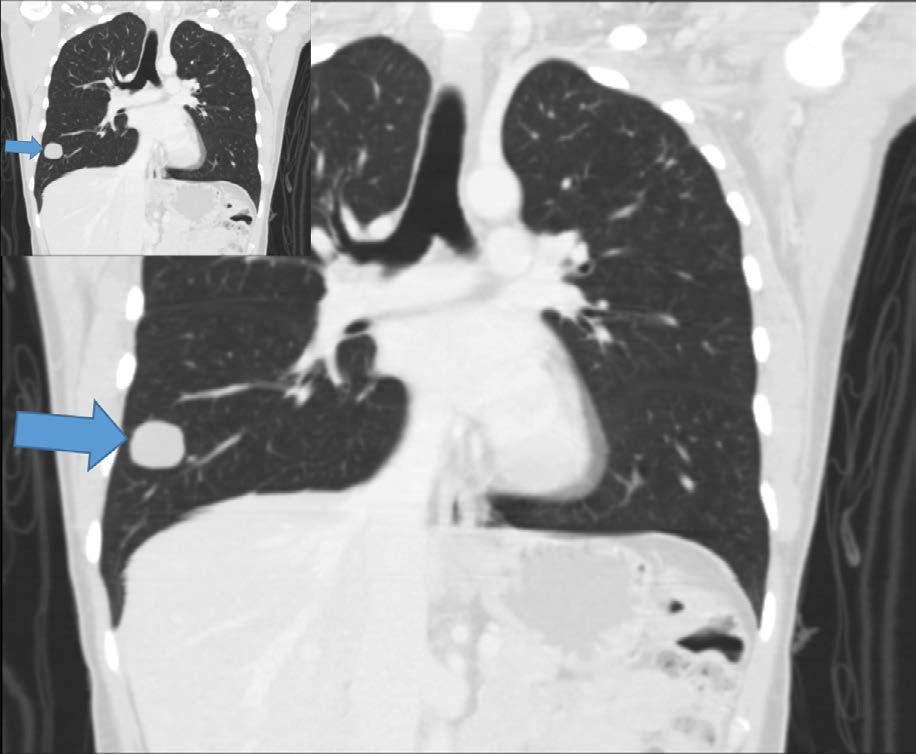 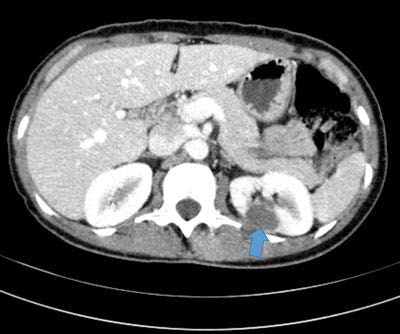 Choriocarcinoma is a rare and highly malignant trophoblastic tumor. It may be of gestational or non-gestational origin(1). The gestational type is most frequentand occurs more often in women of reproductive age, usually one year after pregnancy. In about 30% of the cases, the woman already has metastatic foci at the time of diagnosis(2).

The non-gestational type was originated from extragonodal germ cells, usually located in the midline of body, being more frequent in the mediastinum, retroperitoneum and coccyx. In women, the incidence is lower than 0.6%, occurs in the second or third decade of life and usually affects the ovary (1).

The metastases are hematogenic and frequently found in the lungs and vagina although there may also be in central nervous system and in other abdominal organs, being rare renal involvement(3).

The interval between the pregnancy and the tumor development is very variable: the longest interval reported in the literature was 22 years(4,5). It can occur in post-menopausal women. In cases of extra gonadal tumor, it is essential to exclude metastatic sites because the primary gonadal malignancy may undergo spontaneous necrosis or regression(2).

The origin of this neoplasia has not been defined yet, but we believe the main hypotheses are “gonoblastic theory”, which justifies the appearance of this tumor by the aberrant migration of the germ cells, still in the embryonic stage and “metastatic theory”, in which occurs spontaneous regression of a metastatic gonadal neoplasm(2,6) .

Gestational and non-gestational choriocarcinoma show similarities in their histology and biochemistry, but are different in their genetic origin, prognosis and sensitivity to chemotherapy. It is extremely important to distinguish these two types because the therapeutic approach of each is different. For this classification the use of molecular analysis techniques is necessary, and it is not possible to perform this diagnosis only with clinical, histological or immunohistochemically evaluations. The gestational subtype presents variable alleles markers of polymorphisms, because there is intracellular presence of the paternal DNA, since the non-gestational type presents only the maternal DNA(7,8).

Cases have been described of metastatic choriocarcinoma without primary lesion in the uterus or ovary due to regression of the primary tumor(9).

The reported case was difficult to diagnose because of the absence of neoplastic gonadal or uterine lesion, raising doubts as to the real origin of unilateral renal tumor. Molecular analysis is not feasible for most of the public health services in Brazil, and it is necessary to perform the indicated treatment for the most frequent cases.

The involvement of the urinary system with the tumor is relatively rare however, once diagnosed, we may find retroperitoneal hemorrhages, lumbar pain, oliguria and noninfectious hematuria(10). The incidental finding of the lesion is the most common form of diagnosis(11). The case reported had no complaints related to the urinary system at the time of the diagnosis or during follow-up, being diagnosed by a tomographic examination in the investigation of a possible hCG-secreting tumor, in the metastatic stage.

Wang et al explains that renal metastasis were invariably preceded by pulmonary metastasis, indicating that renal metastasis is secondary to a hematogenic dissemination from the pulmonary disease(12). This couldnot be confirmed in the case reported because there was a delay to start the follow-up and both pulmonary and renal lesions were already present at diagnosis, making it impossible to identify the primary lesion.

High-risk gestational trophoblastic tumors must be treated with polychemotherapy and the most used combination is the EMA-CO and 50% of women require associated surgical treatment(13,14). Our patient responded well to the treatment with EMA-CO and no need surgery.

Conflict of Interest: All authors disclaim any conflict of interest.