We report the case of a person living with human immunodeficiency virus (HIV) in which inconsistent serological results were observed during antiretroviral therapy (ART). Data in this study was obtained by medical chart analysis and literature review. The case reported and reviewed data put on focus the discussion of the change in the profile of the immune response mediated by anti-HIV antibodies in individuals using antiretroviral therapy (ART). The results demonstrate that continuous use of ART can modify the typical reactivity of HIV specific antibody responses, as well as it can alter the kinetics of this response in individuals who discontinue therapy.

The diagnosis of human immunodeficiency virus (HIV)/ acquired immunodeficiency syndrome (Aids) infection plays an important role in the identification, staging and initiation and monitoring of antiretroviral treatment (ART) in infected individuals. ART reduces HIV in peripheral blood and reverts the characteristic immunodeficiency, thereby has led to dramatic reductions in the morbidity and mortality associated with this disease, and has benefited patients by increasing survival(1, 2).

Currently, it is recommended to start ART as soon as possible after the diagnosis of HIV infection to minimize the risk of forward transmission, interrupt the seeding of latent reservoirs, delay disease progression, and enhance patient quality of life(3). However, the reduction or elimination of viral expansion by ART in acute HIV infection to below the threshold required for evolution of an anti-HIV immune response may be impacted, with delay or blockage in the formation of specific antibodies against virus, which are the basis for serological detection of HIV. Seroreversion from reactive to nonreactive results by HIV antigen/antibody combination assays has been observed in HIV-infected individuals who initiated ART during acute HIV infection(3). Although less frequent, this situation has also been documented in patients on long-term suppression(4). ART is very effective in controlling infection, but elimination of viral infection has not been achieved as yet, and upon treatment interruption an immediate rebound of viremia is observed(1). The “Towards an HIV cure” initiative aims at HIV eradication or at least lasting remission of infection during which the host can control viral replication in the absence of treatment(5).

Regardless the different approaches currently being carried out in relation to the cascade of HIV/Aids care, there is a consensus that diagnostic testing is the first step, and registration allows assessments of patient adherence and retention to health services and missed opportunities in treatment and prevention strategies(6-9).

In Brazil, since 1998, the Ministry of Health (MoH) has standardized HIV testing algorithms, which are revised as the available technologies evolve. Currently, different flow diagrams are standardized for diagnosis in different situations and local conditions of laboratorial infrastructure(10). Thus, according to need, they can be used from rapid tests to molecular tests to ensure that the diagnosis of HIV is safe and completed quickly, impacting the transmission of the virus and the emergence of new cases(9).

In this context, it is important that HIV testing results based on the detection of specific antibodies or the detection of virological markers, should be analyzed in conjunction with the patient’s clinical conditions and epidemiological data, considering that the quality of the results can be influenced by different biological factors of the host and the agent, such as ART and viral diversity. Prolonged ART with undetectable viremia can lead to a decline in HIV-specific antibodies titers(1, 4, 11).

To report the case of person living with HIV (PLH) in which inconsistent serological results were observed during ART.

The necessary data was obtained by medical chart review, and literature review.

This is a patient with chronic kidney disease who, in August 2000, underwent a kidney transplant and with nonreactive serological result. After 12 years ( July 2012), sought care at the hospital where he performed the surgery, complaining of lung problems. He was diagnosed with Pneumocystis pneumonia, advance cytomegalovirus (CMV) disease and HIV infection. He was hospitalized for 25 days, without loss of renal graft, with return to immunosuppression and starting ART.

The first tests for monitoring and counting T lymphocytes were performed immediately after the serological results. Table 1 shows the results of laboratory tests performed in the diagnosis of HIV infection, which shows the association of viremia with a marked decline in the number of CD4+ T lymphocytes.

A follow up test, with suppression of viremia [ribonucleic acid (RNA) not detectable] and the increased number of T lymphocytes cell count demonstrated the control of infection during ART.

After the diagnosis of HIV infection and initiation of ART, the patient underwent monitoring exams (viral load and T lymphocytes cell counts) at different times. In 2018, on return to the medical service, he reported having started hemodialysis and presented some HIV serological testing results that due to inconsistencies left him unsure on the diagnosis in 2012. Table 2 shows the laboratory results of the patient using ART, from 2013 to 2018.

In July 2018, after a long period on ART (seven years), the patient discontinued treatment at his own discretion, possibly due to inconsistencies in HIV test results from 2017 and 2018. The physician requested support from the social service for the return of patient to the medical center for further exams. Table 2 shows the laboratory results performed during the period that ART was interrupted, which confirm HIV infection.

With the interruption of therapy, there was an increase in HIV viremia and, consequently, higher antibody titers, which were also detected in confirmatory serological assays. 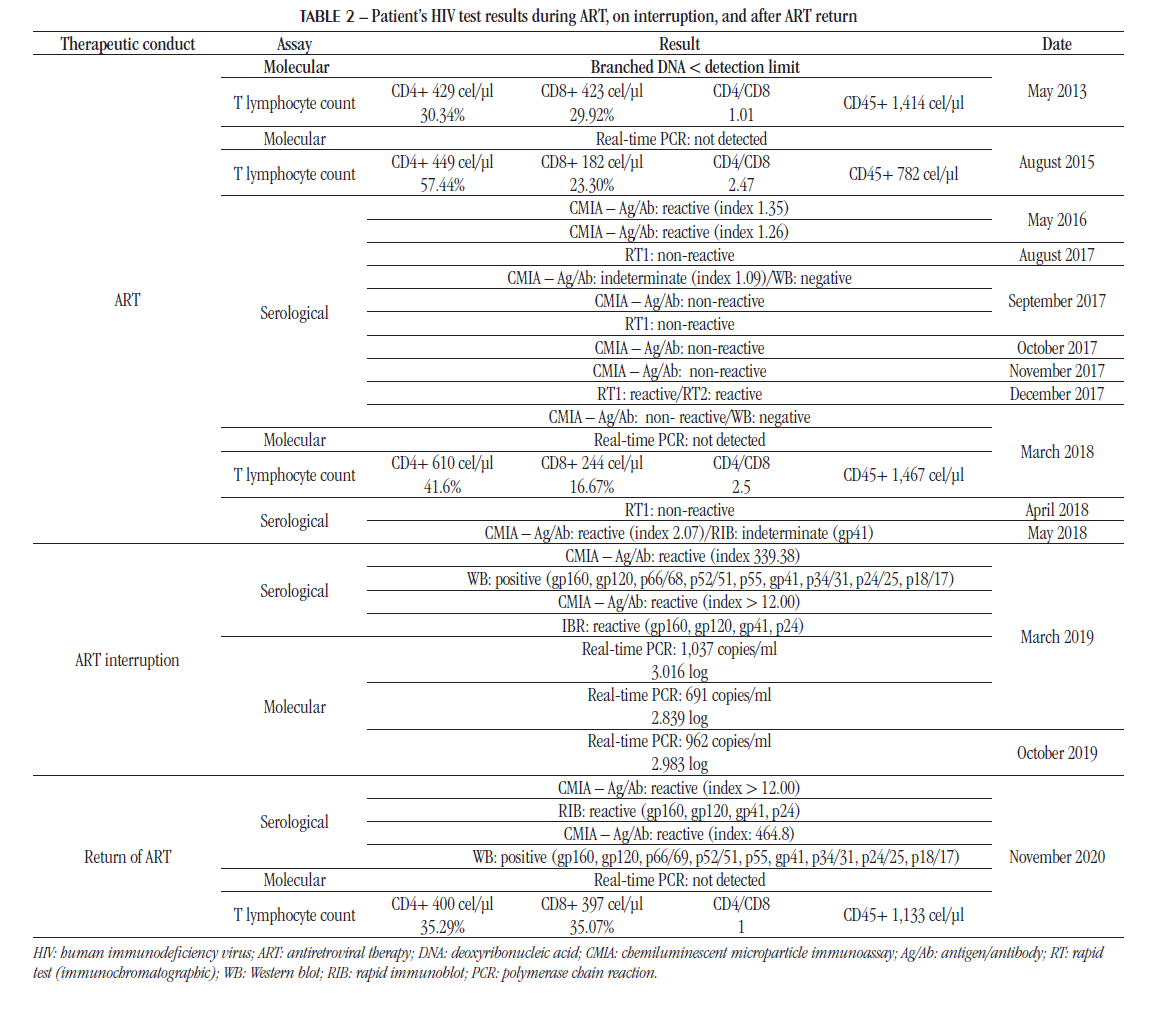 In this study the patient started ART soon after the diagnosis of HIV infection and continued for several years without interruption. The efficacy of the treatment was demonstrated by suppression of HIV plasma viral load and increase of CD4+ T cells count. The monitoring of these parameters and improvement of clinical symptoms of patient infected with HIV are good indicators of adherence to treatment(13). On the other hand, the rapid and effective virologic suppression due to potent antiretroviral therapy may result in levels of antigenic stimulation that are inadequate for developing and maintaining HIV-specific antibody responses(14). Incomplete evolution of the HIV antibody response or presence of seroreversion (although infrequently observed) underscore the potential immunologic effect of early antiretroviral therapy in patients with primary HIV infection(14).

During treatment the patient underwent serological tests which showed inconsistent anti-HIV results (reagent, non-reagent and indeterminate). These results left the patient in doubt about the accuracy of his diagnosis in 2012. Studies show the risk of negative serological results in people on ART(14). The absence or decrease in HIV-specific antibody titers in peripheral blood(14, 15) and the sensitivity of antibody detection tests used may explain inconsistent serological results during ART. Clinicians and patients must understand that, despite a non-antibody response and negative HIV antibody tests, the infection is persistent and treatment should continue to prevent viral rebound after ART discontinuation(16). Cure is still not attainable due to a reservoir of infected cells that harbor the virus in a latent form that may decrease the antigen exposure that seems necessary to the immune system of some individuals to maintain serological markers. This is a feature of current therapies, that however benefit the patient with the maintenance of viremia suppression, preventing the emergence of drug resistance, and leading to the durable clinical benefits of ART(17, 18). The suspension of therapy therefore is not recommended as viral replication and associated viremia promote damage in immune cells, and the health personnel dealing with those patients must be aware of this possibility and work to avoid ART interruption.

In this context, the performance of serological tests to confirm the HIV infection or as routine procedure for medical intervention in patients on ART may present false-negative results(4). This is especially true for early treated patients, in which up to 25% of these may show inconsistent serological results in at least one type of test(19). It is worth mentioning, that to avoid this kind of mistake, one should consider the discontinuation of HIV serology in dialysis individuals already diagnosed with this infection. It would be important to review protocols for serology in patients with chronic viral infections in treatment to avoid situations like this.

Latent and persistent infection by a small population of quiescent proviruses is founded within a long-lived population of memory T cells, capable of reigniting new cycles of replication if therapy is interrupted. This latent pool of virus is established within days of infection and is unaffected by the antiviral immune response or current therapy. Proviral latency is maintained in part by the quiescent state of the infected cells and their long lifespan(17). With the patient’s decision to discontinue therapy due to inconsistent results, the provirus promptly emerged from the reservoirs, resulting in rebound viremia and induction of antibody reformation(4, 14). The return of HIV-specific antibodies in peripheral blood may be a substitute marker to evaluate the HIV replication burden and the presence of the viral reservoir(11).

In order to improve the disease prognosis and decrease secondary transmission, the “test and treat” strategy has been stimulated, but the effective treatment may influence the performance of HIV antibody-based diagnostic assays(4, 16). The antibody response may be altered on the use of ART, thus, it comes to the importance of knowledge about the performance of HIV diagnostic tests(4). Although serological assays for HIV diagnosis have evolved considerably, the limits of each test must be borne in mind(11). The selection of appropriate diagnostics in an evolving field with frequently changing guidelines has been challenging but necessary in order to improve the quality of patient care with a better understanding of the epidemic. Diagnostics have played a critical role in the fight against HIV/Aids, and achieving epidemic control will require responsiveness and adaptation of HIV diagnostics to overcome the challenges in identifying virus status and monitoring HIV-infected patients on ART(13).

Functional-cure interventions have been developed to reduce or eliminate the latent reservoir and are moving into clinical studies, with the ultimate goal of achieving ART-free HIV remission. Assays to quantify the total burden of HIV-infected reservoir have been essential in determining whether intervention methods are successful in reducing the reservoir size and potentially eradicating the virus. The lack of reliable, reproducible, and sensitive assays to evaluate the magnitude and character of the latent reservoir has been a key barrier in evaluating these interventions(20).

The case reported and reviewed data put on focus the change in the profile of the immune response mediated by anti-HIV antibodies in individuals on ART. The results demonstrate that prolonged ART modifies the typical evolution of the response of HIV-specific antibodies, as well as it can alter the expected kinetics of this response in individuals who discontinue therapy. Bases on the results presented here, HIV serological tests should not be performed on HIV-infected people with confirmed diagnosis receiving antiretroviral therapy due to possible fluctuations in their results. For these patients, viral load is used for HIV monitoring along with T cells count, and in the case of virological failure the drug resistance genotyping may be required. It is essential for the PLH, coming from physician who assists him in this case, to have knowledge that the performance of serological tests during ART can lead to inconsistent results, which does not indicate viral eradication but the effectiveness of the treatment.