Pierre Robin sequence is a neonatal disorder characterized by micrognathism, glossoptosis and cleft palate. We reported an autopsy case of a child whose malformations of the oropharynx were identified only at birth. The child was extremely preterm with severe neonatal depression and poor recovery, and the orofacial alterations prevented the correct treatment. There was facial disorder characterized by micrognathia associated with cleft palate and posterior displacement of the tongue, compressing the vallecula, structurally compatible with glossoptosis. This autopsy surpassed the scientific and epidemiological relevance, allowing the family genetic counseling and close monitoring of a subsequent pregnancy.

Pierre Robin sequence (PRS) is a neonatal disorder characterized by the triad of micrognathism, glossoptosis and cleft palate. Micrognathia, detected by mandibular underdevelopment, and glossoptosis, identified by the posterior displacement of the tongue, causing obstruction of the pharynx, are consensual aspects of this malformation, constantly described since its first report, in 1923, by the French stomatologist Pierre Robin. In 1934, the same author improved the description pointing out the presence of cleft palate, seen in 90% of cases(1-3). In 1976, this group of malformations was attributed to successive process changes derived from loss of mandibular embryological development(4). This report describes the case of a child, undergone autopsy, whose malformations of the oropharynx were identified only at birth.

A 24 year-old woman, 26 weeks pregnant, was admitted to the emergency hospital of Faculdade de Medicina de Botucatu, Universidade Estadual Paulista (HCFMB-Unesp), with clinical manifestations of low back pain radiating to pelvic region, associated with small vaginal blood loss. This was the patient's second pregnancy. The first pregnancy (about a year before), had ended in spontaneous abortion at 12 weeks. The patient attended prenatal clinical care, and no unusual presentations were reported in her ultrasound examinations. On physical examination, the patient was normotensive, afebrile, ruddy, hydrated and responsive. The obstetric physical examination showed uterine height of 25 cm, cephalic fetal presentation, with good fetal parameters (detectable fetal movements and fetal auscultation of 147 beats per minute). Gynecological physical examination showed full dilation with intact membranes without any signs of lower genital tract infection. The obstetric team diagnosed preterm labor. The patient was hospitalized and underwent a cesarean section.

The child was male, extremely preterm (gestational age of 26 weeks), appropriate for gestational age, with extremely low birth weight. At birth, he had severe neonatal depression with poor recovery (APGAR 1-3-4). The pediatric team observed the presence of orofacial alterations that prevented the accomplishment of tracheal intubation. An emergency tracheotomy was performed. However, after two hours, the child suffered a cardiac arrest and eventually died.

At ectoscopy, there were the tracheostomy hole and umbilical catheterization. In addition, there was facial disfigurement characterized by micrognathia (Figure 1A). The inspection of the oral cavity showed cleft palate (Figure 2), more pronounced in the posterior portion. After the removal of organs, the block of the cervical viscera pointed to posterior displacement of the tongue, compressing the vallecula, structurally compatible with glossoptosis (Figure 1B). No other alterations were detected in the organs. 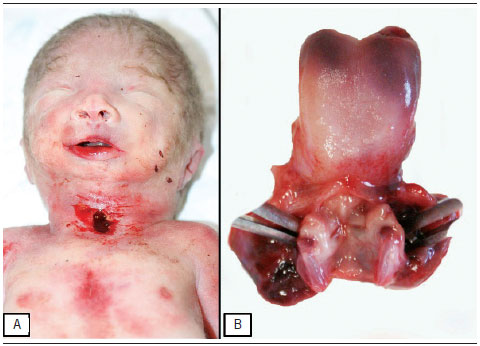 Figure 1 - Ectoscopy and cervical viscera
A) ectoscopy shows micrognathism: facial contours in the mandibular region are depressed; B) cervical viscera: posterior displacement of the tongue, compressing the vallecula, structurally compatible with glossoptosis 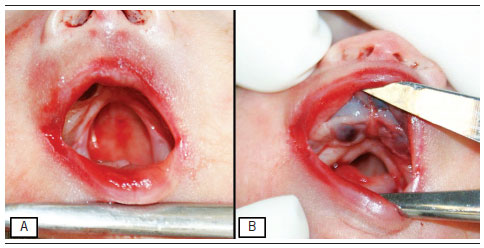 Figure 2 - Oral cavity
A) and B) oral cavity showing the cleft palate, mainly in the posterior region.

The malformations observed at autopsy were consistent with those observed in PRS. Preterm birth of the child was an important factor in the outcome of the case: the patient had severe neonatal depression, requiring tracheal intubation, a procedure that was not possible due to the set of orofacial problems. Although tracheostomy was attempted, the baby survived for only two hours, progressing to respiratory failure, terminal cause of death.

The autopsy proved to play an essential role in the case, as malformations were not detected before birth. The family could undergo genetic counseling at a specialized service. In the subsequent pregnancy, the third one, two years after the child presented in this report, mother and fetus were closely monitored by a high-risk obstetric care service, ensuring periodic morphological ultrasound to screen for alterations.

The incidence of PRS is estimated at 1:8,500-14,000 births, and this disease is associated with high morbidity due to the airway obstruction provided by poorly set formations of the oropharynx(5). Epidemiological studies show mortality rates between 1.7% and 11. 3% over ten years, emphasizing that, in 26% of the cases, there is the coexistence of some other congenital diseases(3).

Among the syndromes that have PRS as a component, the most commonly reported is Stickler syndrome, which demonstrates changes in the eyes, ears and skeletal system. Manifestations are not always apparent at birth(2). Other reported syndromes are velocardiofacial syndrome (associated with mutations in the 22q11.2), alcohol-fetal syndrome, and trisomy 18(5). Cardiac or limb abnormalities have also been reported in PRS.

PRS generally presents with cleft palate, but the prognosis tends to be positive, even with clinical outcomes(2). Patients with PRS in its isolated form have feeding and breathing difficulties due to airway obstruction. The main manifestations are shrill breath, recurrent episodes of cyanosis, protrusion of the upper chest and retraction of the external function in respiratory distress. These children, due to the difficulties in swallowing, may develop malnutrition, gagging and vomiting, and often require suctioning(2). Airway obstruction in these patients is consequence of the disproportionate growth of the tongue, as well as the loss of voluntary control of this muscle, often leading to tongue prolapse in the cleft palate. In addition, the tongue can cause negative pressure in relation to the hypopharynx, worsening the obstruction(7). Positive prenatal prognosis of this disease is possible, but very rare, with few reported cases in the literature. Early diagnosis of this pathology could favor a better prognosis for these children, since the pediatric team, through assisted birth, could be prepared for the clinical difficulties that will be imposed by the child's formative changes(7-9).

In spite of a well-defined clinical presentation in the literature, the pathogenesis of PRS is poorly understood, especially its heterogeneity(1, 7). The central event is hypoplasia of the mandible causing the superior-posterior displacement of the tongue, preventing the correct closing of the palatal shelves before the tenth week of pregnancy(3). The etiological approach of mandibular hypoplasia includes different theories. One of them is the mechanics theory that attributes the malformations of PRS, mainly in isolation, to the intrauterine mechanical factors, which would affect mandibular growth(1, 2, 4). Another explanation uses the psychomotor development of children, according to which loss of motor control of the oral-esophageal muscles occurs in a degenerative context, culminating in the mandibular hypoplasia, triggering the other component changes of PRS(4, 6).

Another etiopathogenic base is represented by the genetic study of this disease(4, 6). PRS, when manifested as a syndromic component, may be included in the 22q11.2 deletion syndrome(3). In the isolation form, there are other genetic target site studies such as chromosome deletions 2q24.1-33.3, 4q32-qter, 11q21-23.1, and 17q21-24.3(1, 3). Recent studies also described mutations in highly conserved elements surrounding regions not coded by the SOX9 gene on chromosome 17q24(1, 5). The signaling pathways for the SOX9 need more studies focused on gene regulation. In general, the SOX9 is recognized as one of many factors involved in chondrogenesis. Mutations and/or variations in the sequence of genes encoding collagen (COL2A1, COL11A1 and COL11A2) have also been reported in patients with non-syndromic PRS(7).

This report discusses the case of a patient who underwent autopsy that confirmed the macroscopic characteristics of PRS and allowed the exclusion of other congenital pathologies. The autopsy study had particular relevance in this case because it went beyond scientific and epidemiological importance, allowing the family to obtain genetic counseling and close monitoring of a subsequent pregnancy.